I travelled to the underground labyrinth of the Belum Caves with my Couchsurfing friend, Priya, and our local Couchsurfing host, Kesava, as a day trip from Gandikota, a nearby historic village and scenic gorge.  Click here to read more about my adventures in Gandikota.

We packed up our luggage at our tent in Gandikota and grabbed a quick dosa (delicious Indian crispy rice batter pancake) or three for breakfast in an outdoor restaurant, which was basically just a shack on the edge of the road, while we waited for our bus.  The locals had told us it would arrive sometime within a two-hour window. When it finally arrived, we bounced back the half hour to the village of Jammalamadugu, where we had first arrived in Andhra Pradesh the day before, and then took another local bus to the village of Kolimigundla, about an hour and a half away.  Here we broke the journey with fresh coconut juice and chatted with a Peruvian couple, the only other foreigners we met during our weekend in Andhra Pradesh, who were also going to visit the caves. A third bus took us the short distance from there to the end of the road to the Belum Caves, the largest cave system open to the public in the Indian subcontinent.  It took almost three hours in total, but was totally worth the journey. 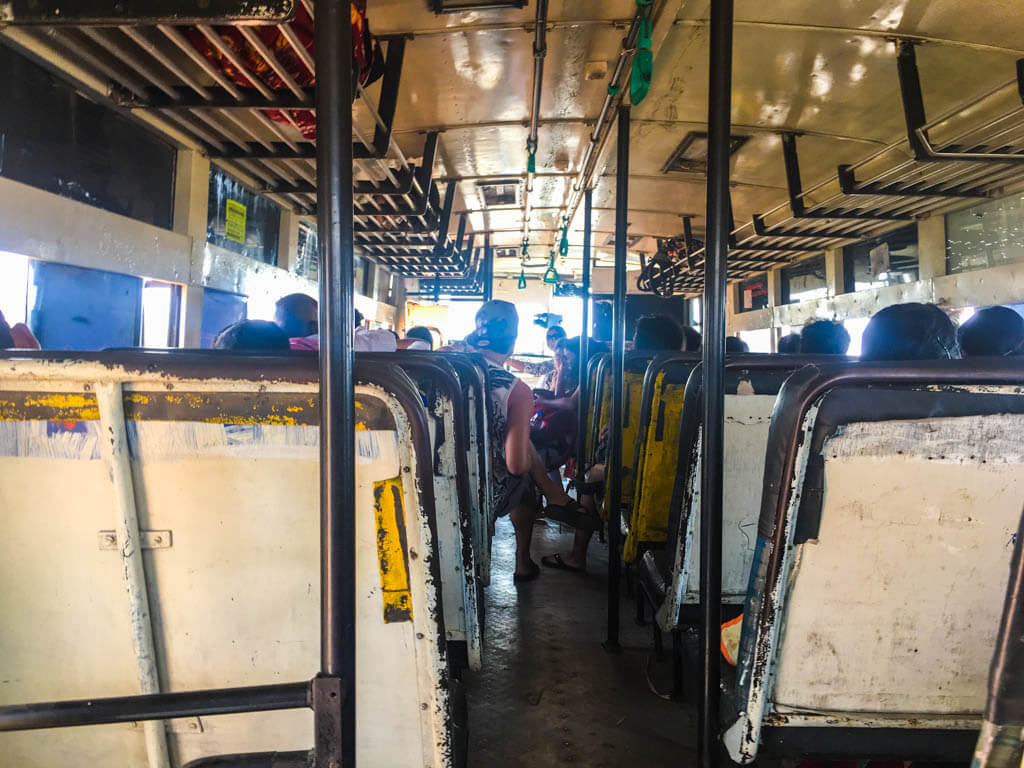 The bus to Kolimigundla. Not exactly luxury transport, but fine if you don’t mind sharing the space with the occasional chicken.

As temperatures approached 40 degrees celsius, we walked the half a kilometer dirt track from the main highway to the cave entrance, past a giant Buddha statue and the words Belum Caves written in huge white letters on a nearby hill, slightly reminiscent of the Hollywood sign in California.  The Buddha statue is impressive in its size, but quite plain compared to similar Buddhas in other places. The people at the Belum Caves ticket office were really unhelpful and refused to let us leave our backpacks with them, saying that we could leave them at the entrance. However, at the entrance it was obvious that they would be sitting in the open and completely unsecure.  I didn’t feel safe leaving my laptop there, so we ended up carrying them through the caves – good thing we travel light! They did only charge us 65 rupees each though, whereas online the price for foreigners is given as 300. I’m not sure if they’ve changed the policy or whether I was just lucky (don’t think they mistook my Scottish accent and beautiful blue eyes for Indian…), but hey, I wasn’t going to question it! 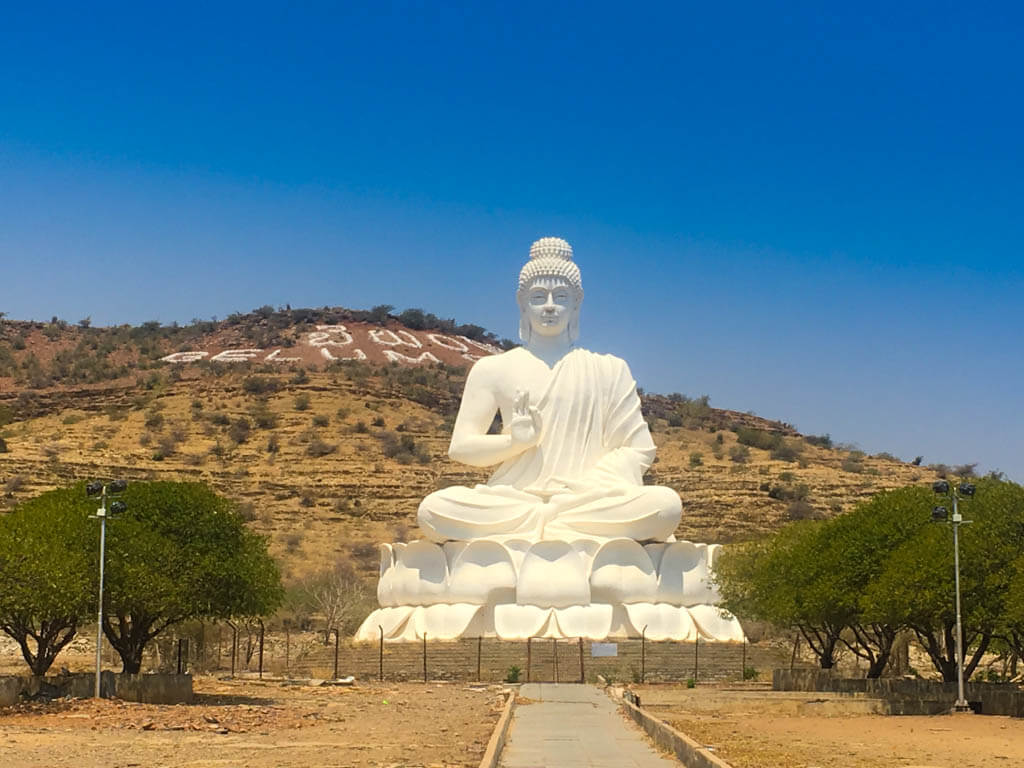 The giant Buddha statue and the ‘Hollywood’ sign of Belum.

We descended into the caves via the modern staircase that was installed when the site was developed for tourism in 2002 and arrived in a large underground cavern with light entering through a natural opening in the roof.  This was the last daylight we would see for a couple of hours. Keseva told us of how, before the site was developed, he and his friends used to climb in through the opening to hang out in the caves. I understand that once the tourist hordes arrive, sites need to be protected, and developing them allows more people to see some of the most amazing places in our world, but it would have been fun to have visited back then.  The fact that we shouldn’t really have been there would have added to the sense of mystery and excitement.

The accessible part of the cave system stretches for about 1.5 kilometers underground and is lit with different coloured lights, illuminating the stalactites and stalagmites in all their eerie beauty.  There are many side passages leading off in different directions, but the main route is clearly marked, so it would be difficult to get lost. The caves are formed from black limestone, which has an unusual almost plasticy appearance quite different from other caves I’ve visited. 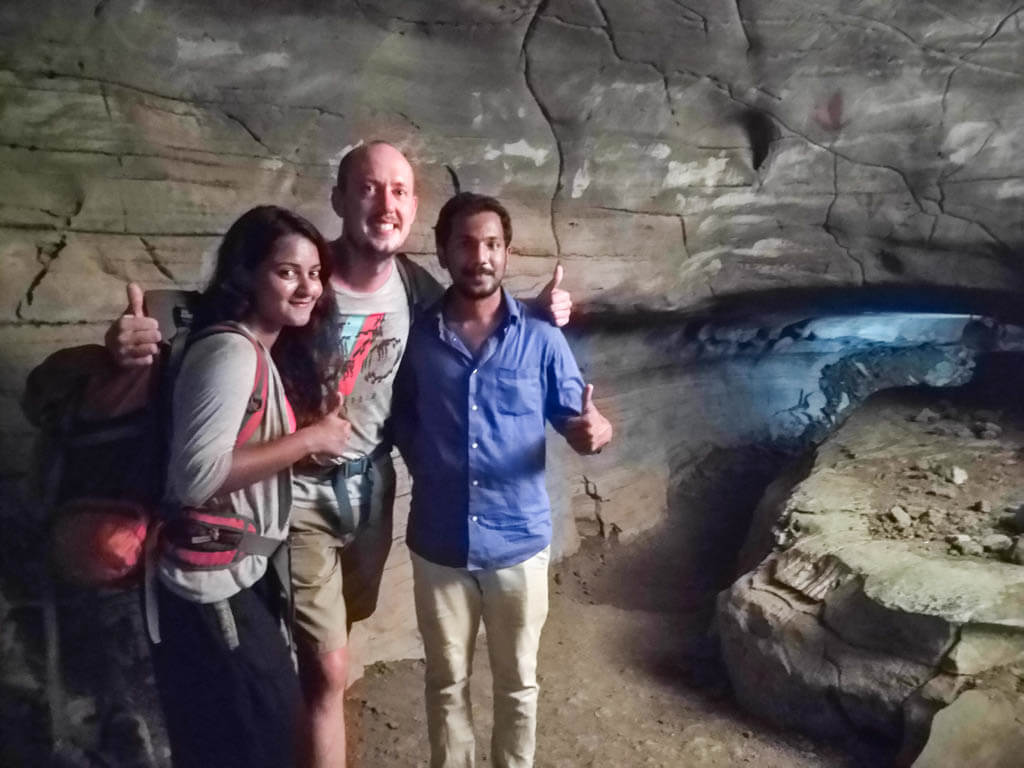 The gang, posing for a photo.

We wandered through the caves and took a few photos under the different coloured lights.  The path is quite long, but easy to navigate and while much of it looks similar, there was one area that looked a bit like a grey underground version of the siq in Petra (the arrow passage through the rock featured in Indiana Jones and the Last Crusade) and a couple of underwater pools.  There were very few people in the caves, so at one point when no one was around we decided to leave the official path and explore one of the side tunnels leading off into the darkness. We scrambled up a few rocks next to the path and hid our backpacks out of sight, then followed the tunnel into the darkness.  It was pitch black after we’d rounded a couple of corners, so we used our phones for light. As we continued, it became gradually colder and very humid, and in some places the roof was so low we had to bend double not to bang our heads. The originally wide passage narrowed until eventually it tapered off into a dead end after a few hundred meters.  There were many other side passages that we didn’t explore, so it was impressive to imagine the scale of the complete complex. 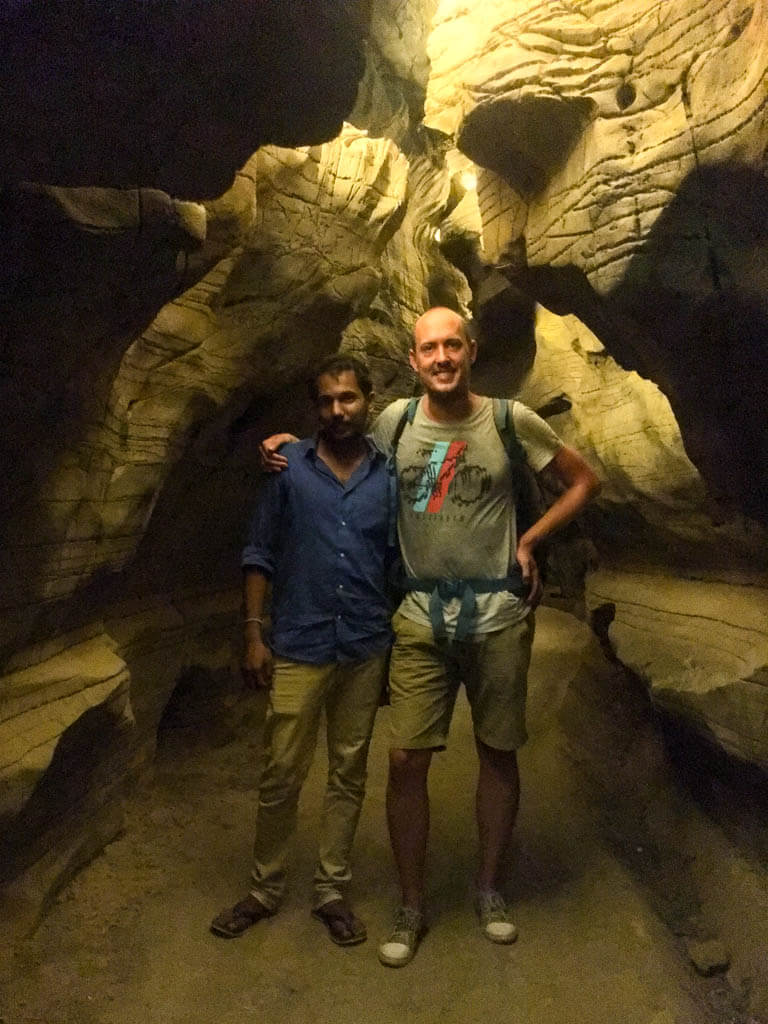 With Kesava under the eerie light of the caves. 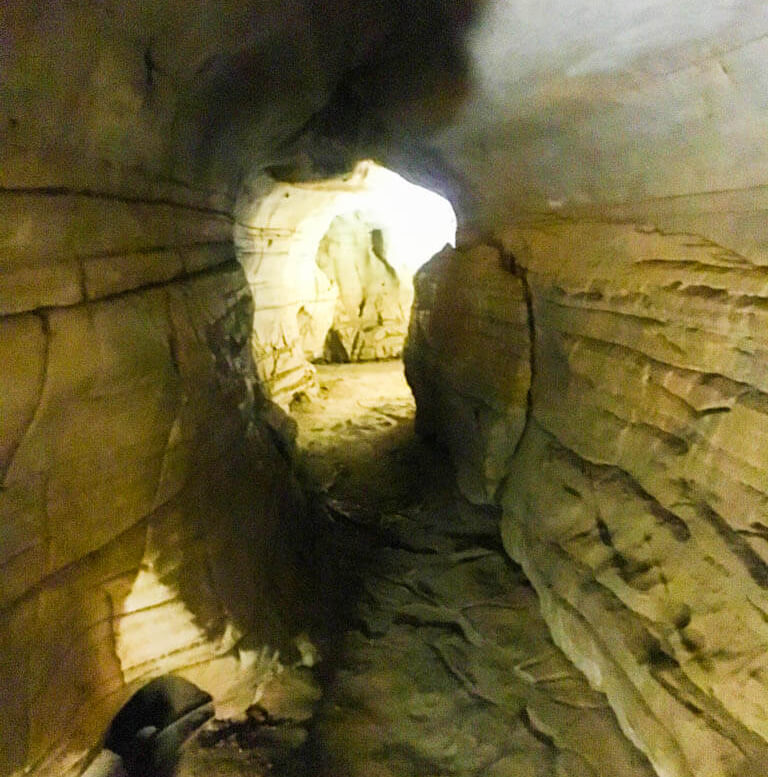 Light at the end of the tunnel.

After we’d finished exploring the caves, we rested in the cafe outside the ticket office under the shade of a tree before repeating the bus journey back to Jammalamadugu.  We were all starving by this time, so Kesava selected a small local restaurant, where we shared a delicious egg curry (no KFC in this part of the world, and all the better for it!).  Then Priya caught her night bus back to Chennai ready for work the next morning (poor girl) and I caught my sleeper bus to Hyderabad. I’m sure the driver thought he was driving a rally car.  I was right at the back of the bus, which amplified the bumps in the rough rural roads, and at one point I literally flew into the air when we went too fast over a particularly large bump, before crashing back down on my bed.  Fortunately, the roads did become progressively smoother as we left the more remote parts of Andhra Pradesh behind us. 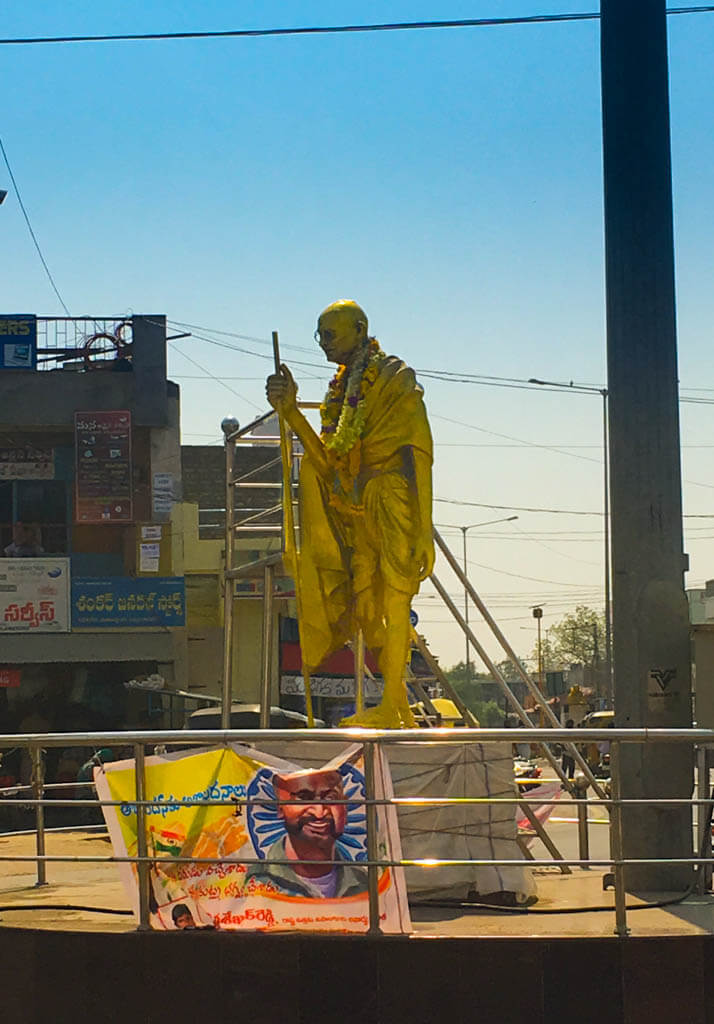 A golden Gandhi watches over the main roundabout in the village of Jammalamadugu.

The Belum caves and Gandikota were two of the highlights of my India trip and all the more so because so few foreign tourists visit this part of the country.  Together they make a perfect two-day itinerary from Chennai, Bangalore or Hyderabad and, despite being so remote, are actually easily accessible by public transport if you don’t mind roughing it a bit.  The journey would definitely be more comfortable with a private car or bike.

How to Get There