The Soviet Village that Time Forgot

Occasionally, due to some unexpected twist of fate, I end up somewhere I never expected to be.  It might be that there was a problem with public transport, someone gave me the name of the wrong town or simply that I met someone who was headed somewhere I’d never heard of before, but that sounded like it might be fun.  Sometimes a place can sound interesting simply because I’ve never heard of it before, and that was the case with Beshalma, a tiny rural village in Gagauzia, a semi-autonomous region of southern Moldova (which I’d never heard of either until this trip). 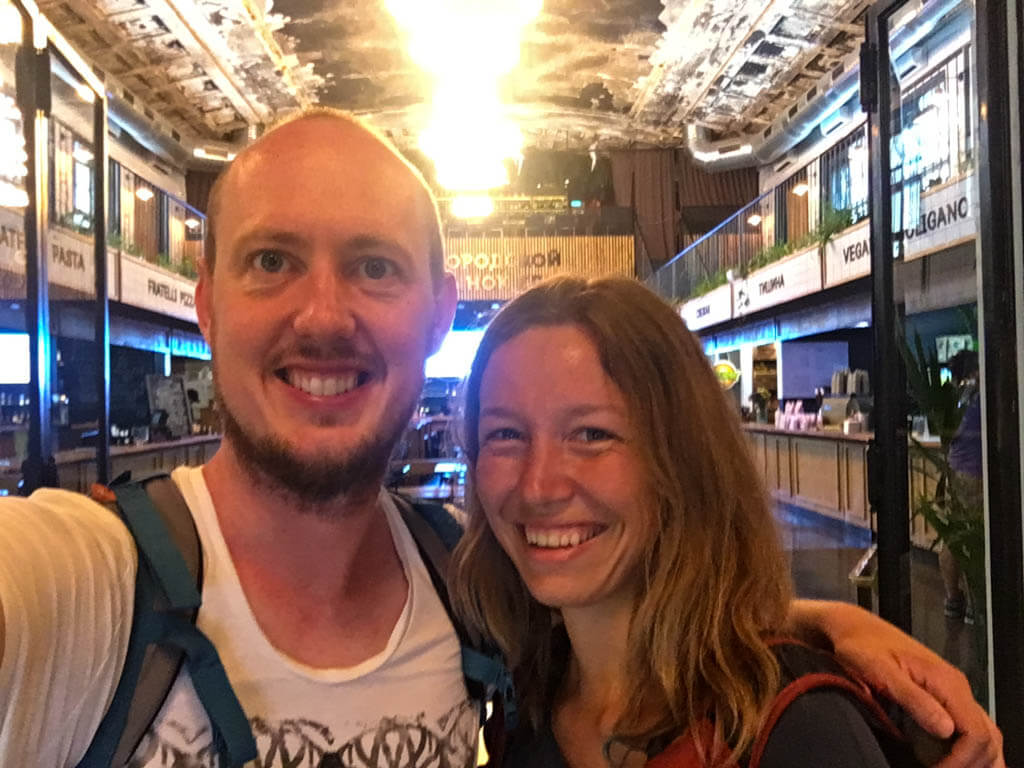 I first heard of Beshalma from my German Couchsurfing travel companion, Inka, when we were staying in Comrat, the Gagauz capital.  Leaving our Couchsurfing hosts one slightly damp summer’s morning, we planned to take a bus, but arriving at the bus stop we soon discovered that there weren’t any (although we never did find out why).  So, being enterprising young (well, more or less) travellers, we decided to hitchhike instead. This turned out to be harder than we’d expected, but after half an hour and a lot of salty Moldovan string cheese to keep our spirits up, we found a car that took us half way.  The driver hardly spoke a word of English, but was very friendly and wrote the word Beshalma on a piece of paper in cyrillic (Бешалма)for us to help us find a lift for the remainder of the journey.

Our second driver dropped us on the main road at the turnoff to Beshalma and we walked about a kilometer from the main road to the village.  We found a picturesque, but slightly dilapidated, farming community with a lot of charm and a very friendly population of just under 4000 inhabitants.  Wandering around town beneath a steely grey sky, we came across a pretty little Orthodox church near the main square with a couple of cute little wells in the grounds.  Unfortunately, it was locked, so we were unable to enter, but the grounds were nice and the wells still worked. Around the back of the church we discovered a classic Soviet-era WWII monument with a statue of a lone soldier and the words All Honour to the Heroes in cyrillic.  This was one of many we would see travelling through the former Soviet Union, in memory of the estimated 27m Soviet citizens who died during the war. 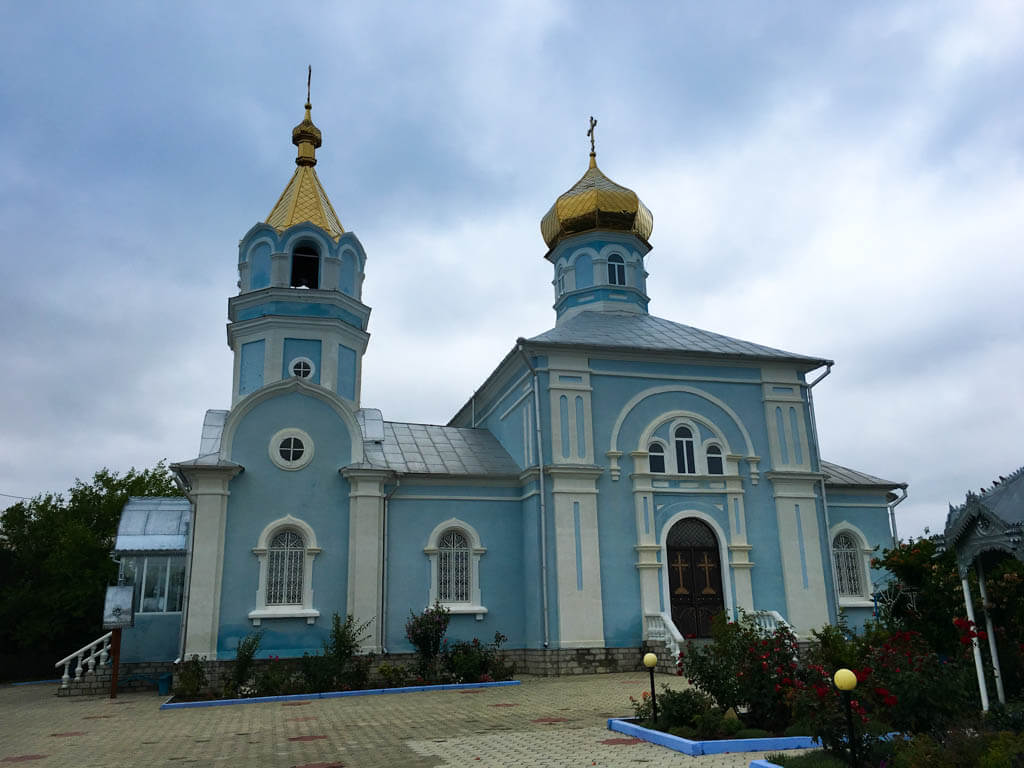 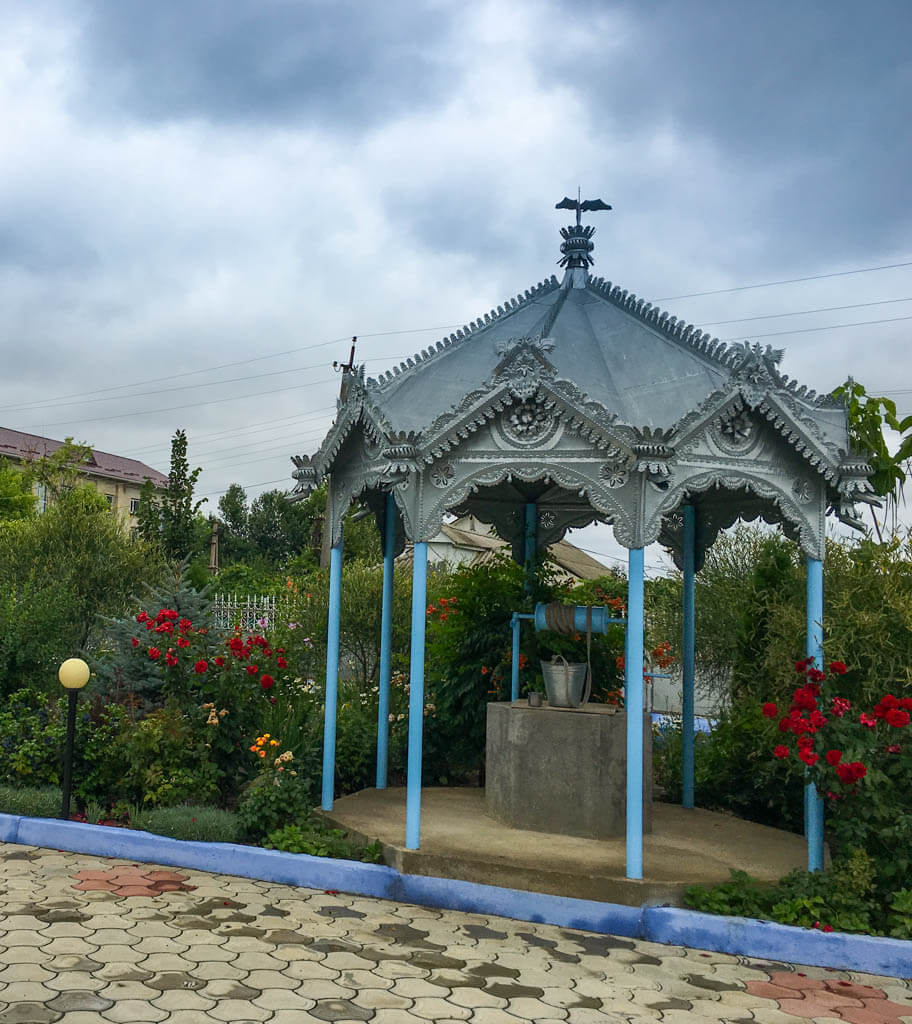 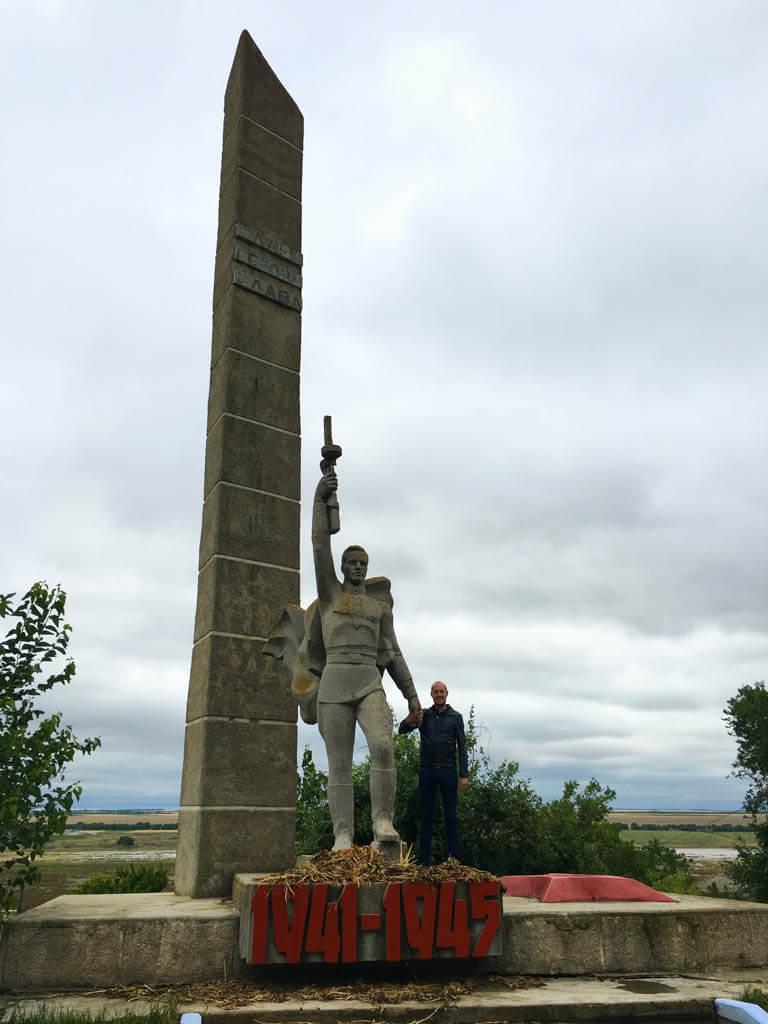 Shaking the hand of a hero

Moving on, we found what sticks in my mind as the most picturesque part of the village: a rundown old wooden windmill perched on a stone platform in a little field by the edge of a dirt road.  As the perimeter fence was not in any state to keep animals in (or us out), the couple of horses in the field were tethered to pegs in the ground and a flock of geese marched back and forth at the windmill’s base.  For me, the charming but old fashioned scene somehow represented the whole area, a place that got left behind as the European parts of the former Soviet Union got absorbed into the EU (Latvia, Lithuania and Estonia), clung to Russia’s orbit and financial aid (Belarus) or became embroiled in conflict (Ukraine).  Most Europeans would struggle to pinpoint Moldova on a map, let alone the republic of Gagauzia, and this felt something like discovering our own secret garden. 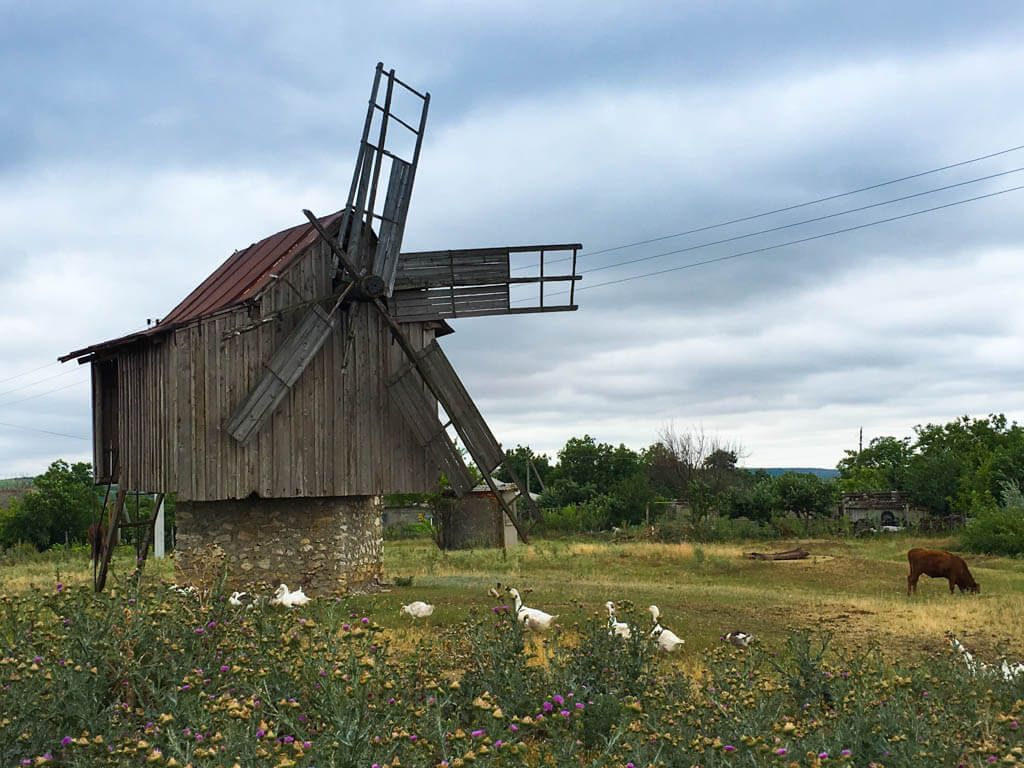 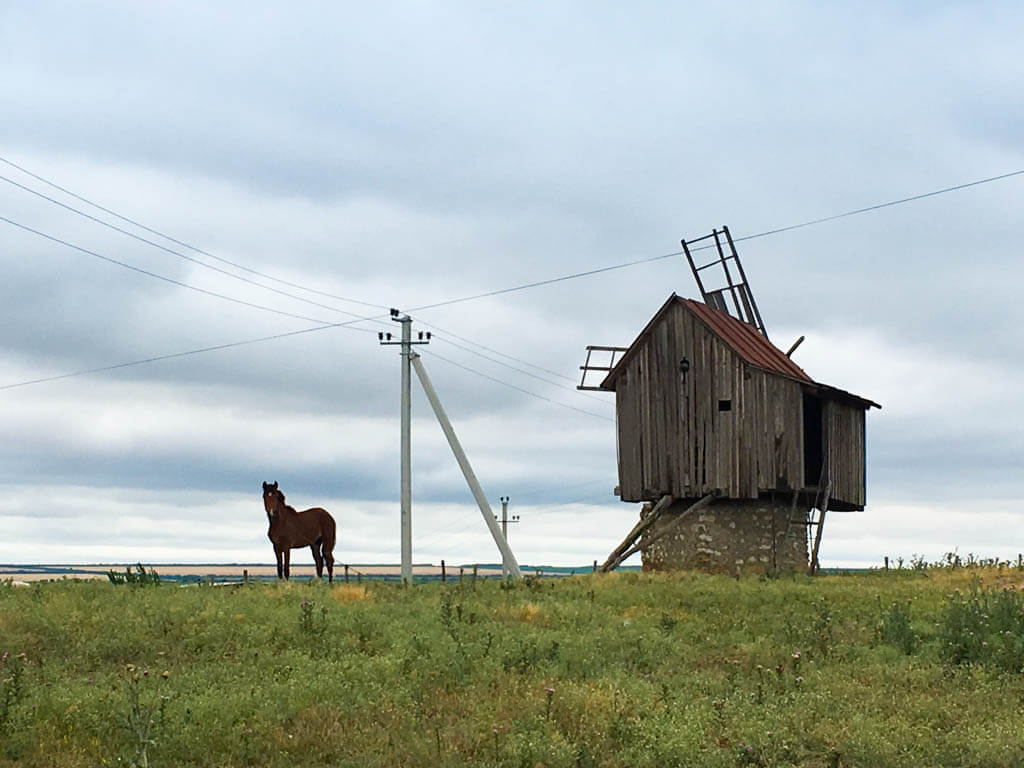 After taking a few photos, while gingerly avoiding one of the horses, which seemed a bit too curious when we got close to it, we returned to the dirt road to wander the village streets.  Passing an assortment of old stone cottages, we picked our way through flocks of chickens, ducks and the occasional dog until we were back at the main square. One thing you’re always guaranteed to find in a former Soviet town or village is a pub, and this was no different – and it was open even in the morning.  We were feeling cold by this time, so a break was most welcome. The bar had old wood-panelled walls and was dark, pokey, almost empty and manned by a slightly-officious-but-friendly-enough lady with a very basic grasp of English. Actually, apart from the lady, it wasn’t so different from a rural English pub and somehow you could sense that this bar had played witness to many an event in the village’s past.  Being happy to escape the chilly air outside, we had a couple of beers and some snacks and soaked up the atmosphere for a good hour before venturing back out.

When we finally emerged, we set off through the winding village lanes down to the lake, which lay in a muddy field just in front of the village.  The lake had tall reeds growing on one side, which I found mildly interesting, but wasn’t nearly deep or clean enough to swim in (plus it was far too cold).  Anyway, we soon become far more concerned with trying to make it back to the road without slipping over in the mud.

The reeds by the lake

The last stop of our Beshalma visit was at the village cemetery, which is out by the main road again.  The cemetery was ordinary enough and we wandered between the tombs of the villagers’ ancestors for a while squinting at the cyrillic inscriptions.  Then, just as we were about to leave, an old lady who looked very sad approached us, accompanied by a slightly younger man. She didn’t speak English, but her companion, who spoke a little, managed to explain that she had been visiting the grave of her deceased son.  She was carrying several packages and from them she produced some of the thick traditional bread eaten in the area, a 500ml plastic water bottle containing some kind of homemade wine and some sweets and held them out to us. After first feeling that we should politely refuse her, we figured that it must be a local custom, so we accepted and wished her well.  Whatever the reason, this was one of several occasions that the locals showed us kindness and I wished I was able to communicate in Russian to learn more about them and their customs. Finally, we headed back to the road to find a lift back to Comrat. From there we would head to our next stop in Gagauzia, to stay with a local family in the even smaller village of Congazcicul de Sus, but that’s another story.

Overall, Beshalma is a charming little village with a strong Soviet feel and definitely has enough curiosity value for a visit.  Of course, there’s no big tourist draw here – don’t expect the Moldovan equivalent of the Eiffel tower – but that all adds to the charm.  This is a place to soak up the atmosphere and get a glimpse into life through the eyes of a rural community in one of Europe’s most overlooked countries.

How to Get There 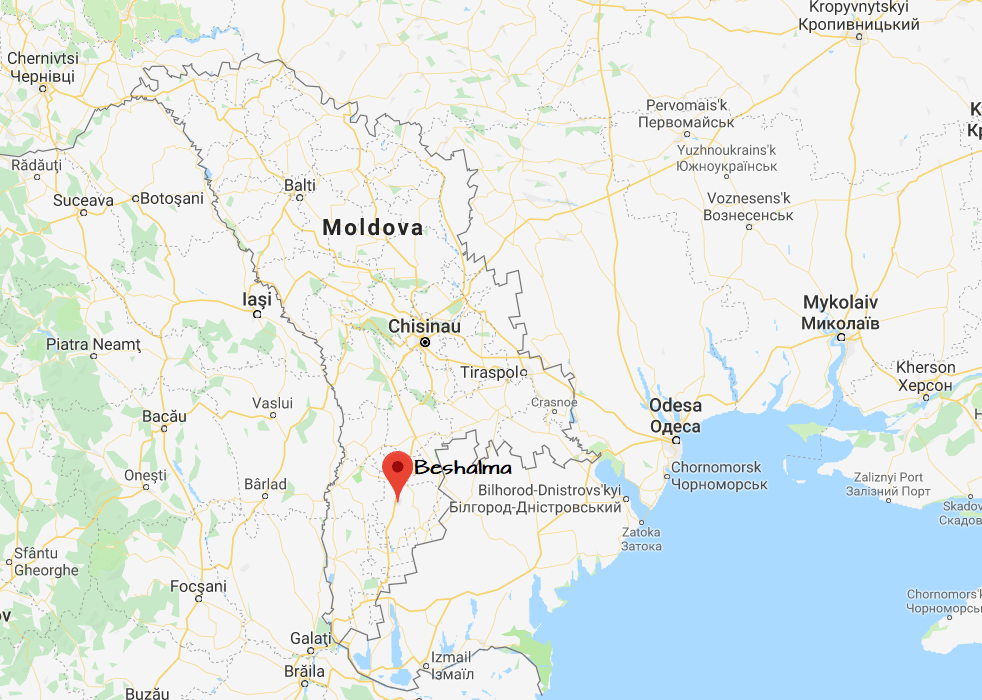 The location of Beshalma in Moldova 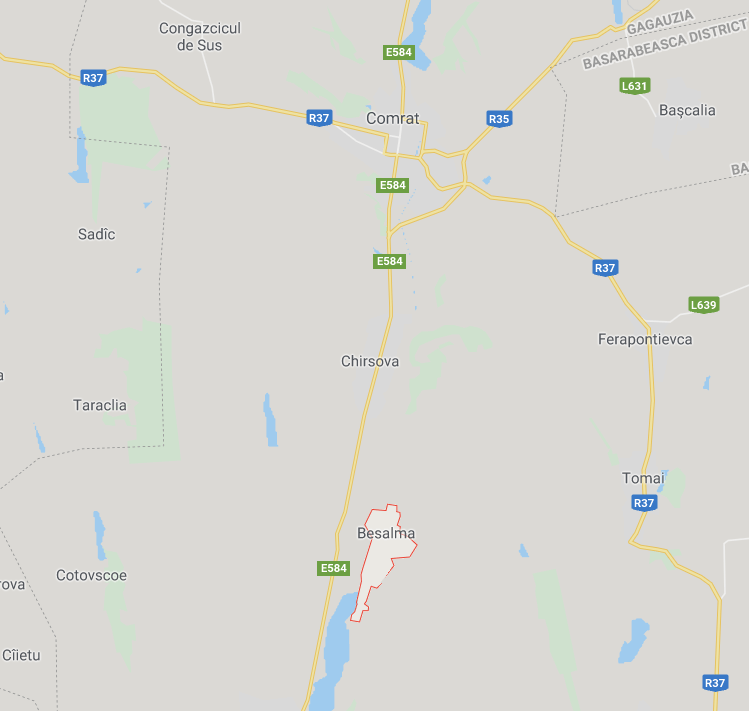 Beshalma lies to the south of Comrat, the Gagauz capital