One of the reasons I love Couchsurfing is that local people (or even other travellers) can often take you to places that you would never have thought of yourself.  In this case, a local-ish (been living in Jakarta for ten years) Couchsurfer, Marsela, suggested that we visit the old harbour of Sunda Kelapa, as, despite being visible from her bedroom window, in ten years she had never actually been there.  I was expecting some kind of fancy modern harbour, all done up for middle-class Jakartans and tourists, with fancy bars and restaurants, but the reality was far better – a gritty old industrial harbour surrounded by decaying buildings, broken sheets of asbestos and a shanty town.  This was the real Jakarta, far removed from the cosseted lives of the middle class around the central district where I had been staying with some American friends.

We took a bus to the old town and then decided to walk to the harbour, following the directions on Google Maps.  The route was busy and we were dodging cars crossing the roads (Jakartan traffic is eternally awful), but also quite pretty, with many old Dutch colonial buildings along the way.  As we walked further from the old town, we crossed a couple of stinky canals and left the colonial area behind us, entering a very local part of Jakarta, where few tourists venture.  The hustle and bustle of everyday Jakartan life surrounded us; small shops and motorcycle repair businesses lined the streets, while hawkers sold vegetables from street stands or from baskets hanging from a pole slung across their shoulders.  Friendly smiles and frequent cheerful calls of “Hey Mister” followed us down the street as we walked. 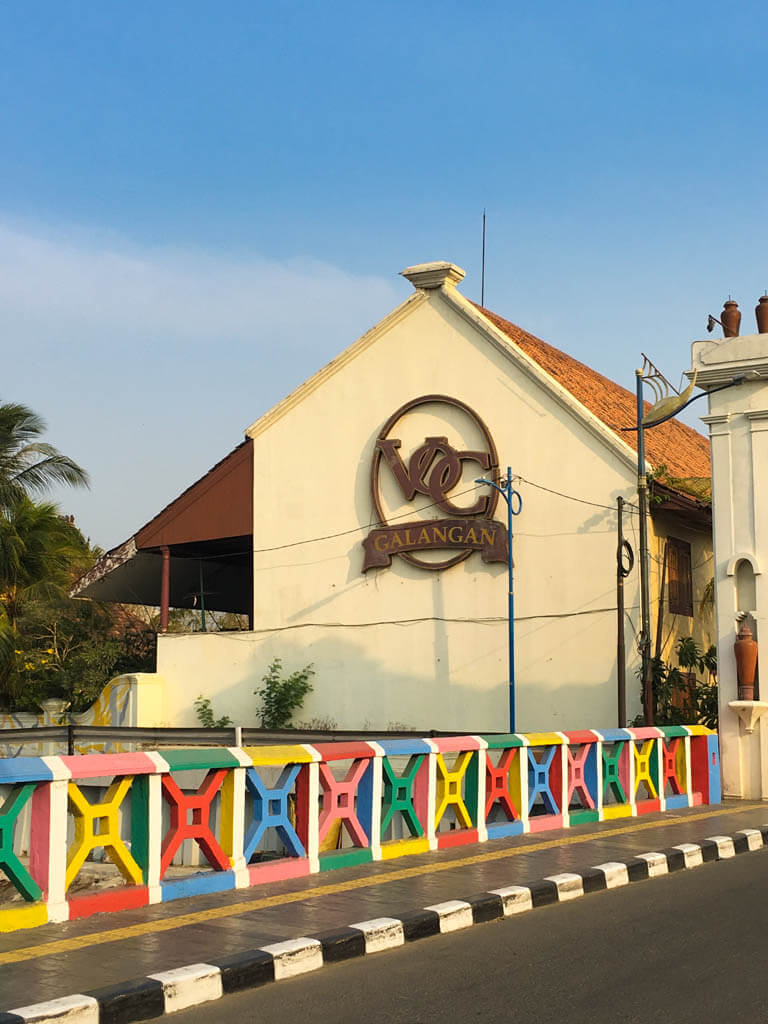 Still following Google Maps, we eventually arrived at a gate with warnings about guard dogs posted on it (written entirely in Indonesian, I wouldn’t have known without Marsela!).  The gate was ajar and, not seeing any obvious signs of canine life, we stepped inside. The area appeared to have been a park, with grass and benches for people to sit on, but was now closed to the public and had a feeling of abandonment hanging in the dusty air.  Indonesians love keeping birds and there were large rusty birdcages housing a variety of different species, the only life that we saw there, spread throughout the park. We walked towards the harbour only to find a high wall between us and the water and a row of shipping containers, that looked like they were being used as makeshift housing, possibly for workers on nearby construction sites, lining the path.  There was a shiny new pair of trainers lying outside one of them, so we knew they must be inhabited (which helped reassure us that a monstrous mongrel wasn’t going to suddenly come flying out of the shrubbery and chase us out of the gate). 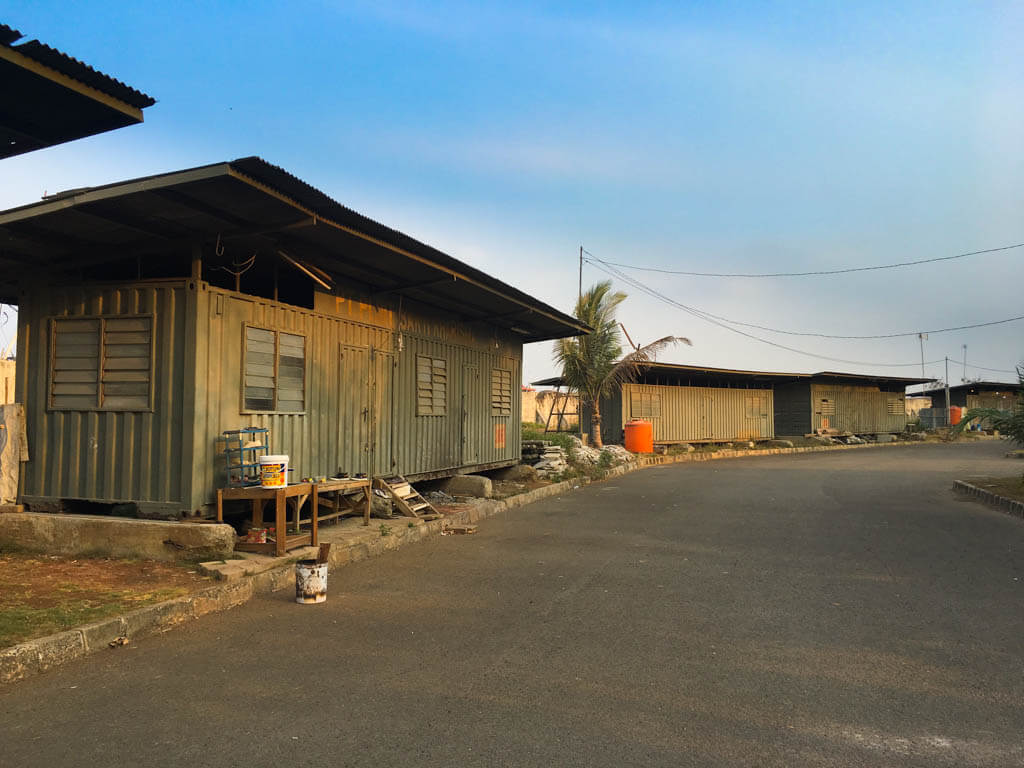 Shipping containers line the path through a deserted park

We followed the path past the row of containers cum houses looking for a way to climb over the wall to the harbour, but the park ended in another high wall and a ramshackle old building.  At first I thought we could scale the wall, which must have been about 2m high, in the corner by the building, but it had a jagged triangular top to prevent exactly that. Looking around, I spotted a weak point in the defences – another wall away from the waterfront was crumbling.  We walked across to it, picking our way between broken sheets of asbestos, shattered glass and other discarded building materials and climbed over onto piles of concrete debris the other side. From there, we were able to pick our way through to the courtyard of a new high-rise apartment building that was still under construction. 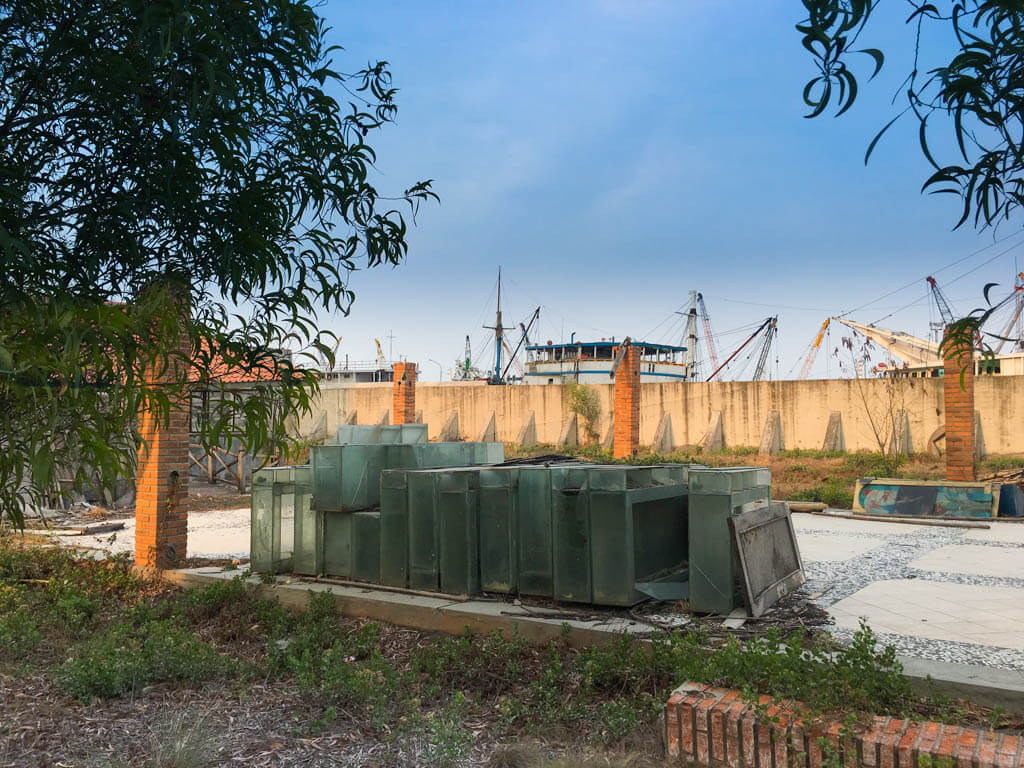 Three little girls, who were playing in the courtyard, came running over to us, “Hello mister!”.  It’s amazing how even young children know this phrase in English. We asked them how to get to the water and they told us we could just climb over the wall around the new apartment block and scramble down the other side.  If a group of 8 year olds could do it, so could we! It was slightly tricky because of the steep incline of the concrete struts supporting the wall on the other side, but we managed to scramble down them. “Hati hati mister!” the girls called – be careful!  We were now on a rough pathway along the edge of a narrow strip of water with boats moored on the other side, where cargo could be loaded and unloaded. After a quick selfie with the girls, we waved goodbye and continued on our way along the waterfront. 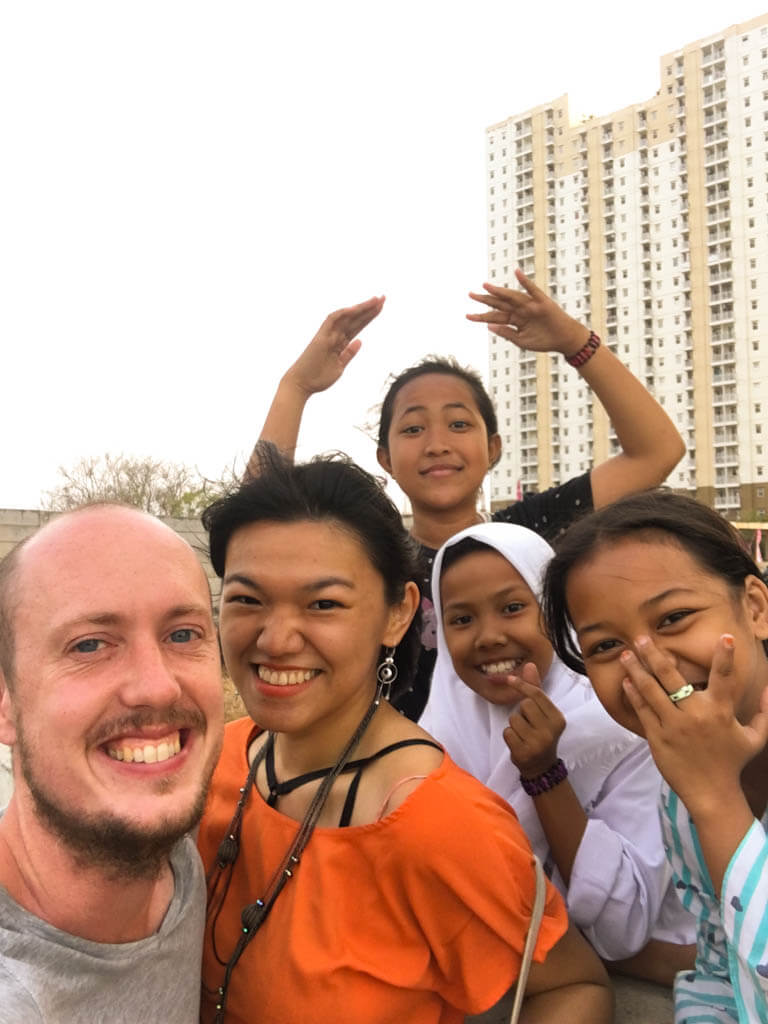 At one point, the path had crumbled away and I had to get a bit creative to avoid getting wet feet, propping a piece of old concrete in the water to use as a stepping stone.  Scrambling over the concrete struts that jutted out into the water, I almost impaled my leg on a one-inch (3cm) nail protruding from the concrete. It went right through my jeans before I’d even noticed it, but fortunately not into my leg!  After failing to bash it in with a plank of wood, I lent the plank against it instead, so that we could clamber around without stabbing ourselves. 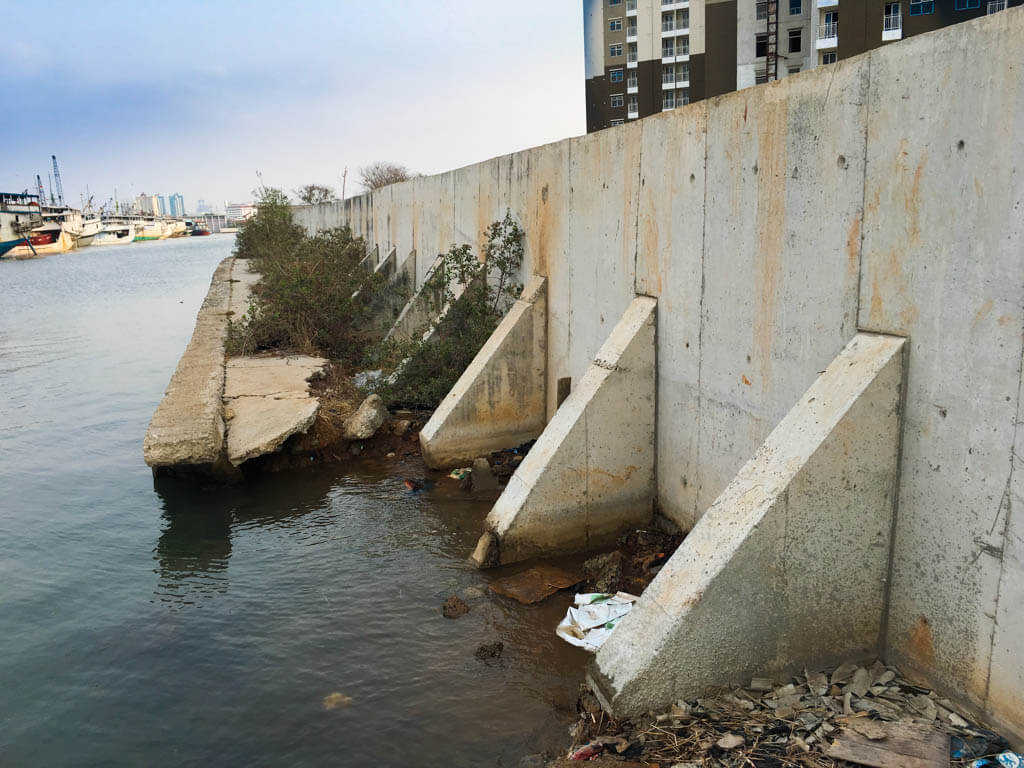 Jakarta is such a crowded city, there is life everywhere, and Sunda Kelapa harbour is no exception.  Groups of men crouched by the water’s edge smoking, presumably the owners of the numerous small boats tied up there.  At one point, there was even a little wooden shack perched above the water on stilts and someone had hung out their laundry to dry on bamboo sticks, probably after washing it in the sea, despite the noxious odor and filthy colour of the water.  One recurrent theme was trash – it was everywhere, especially plastic. Even the laundry was hanging above a sea of waste. 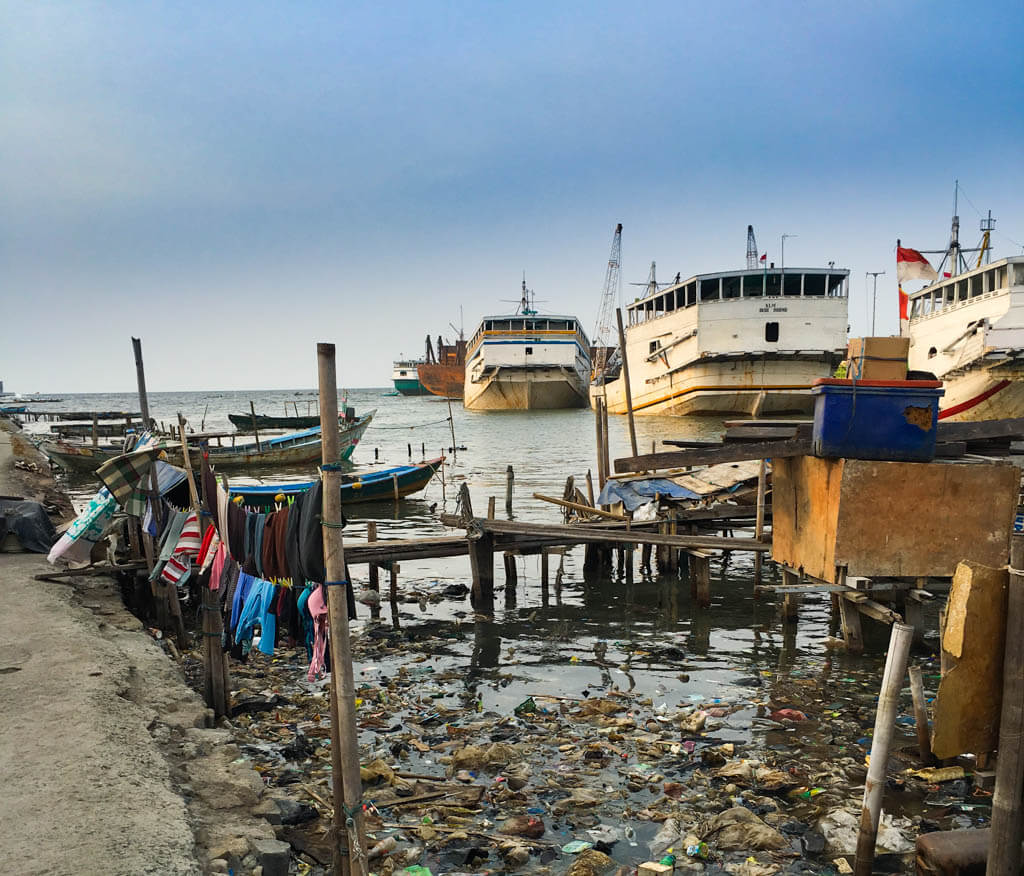 Wouldn’t be my first choice of location for doing laundry. Look at all the rubbish. 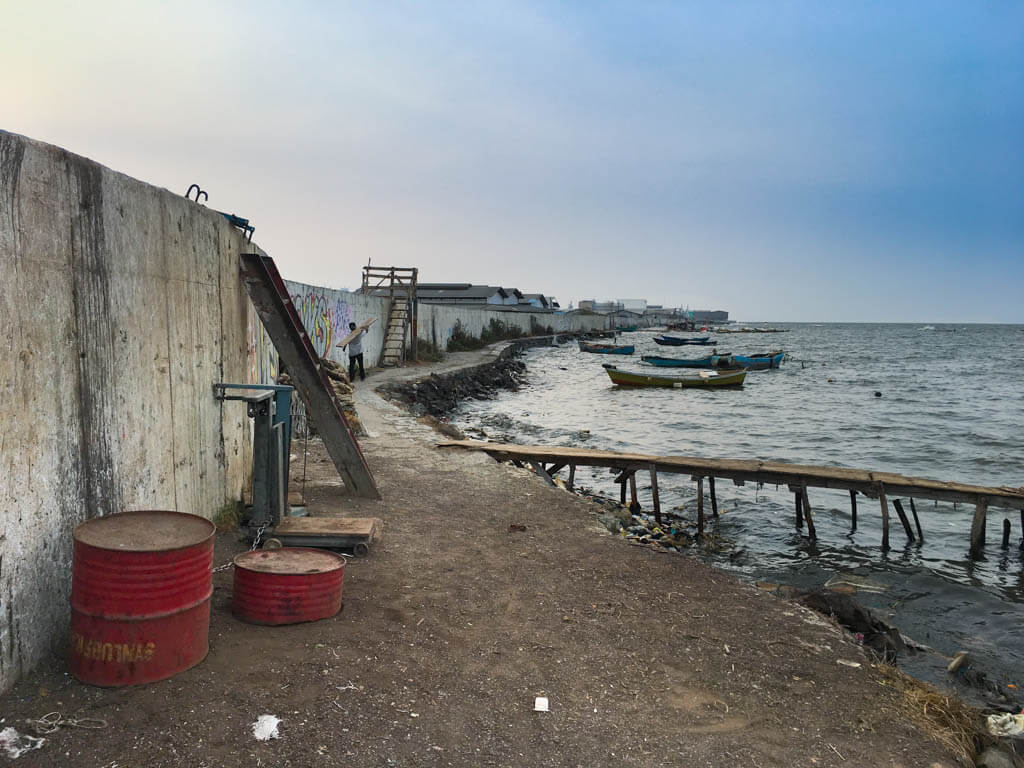 Walking on, we came across a family of cats playing by the water’s edge.  One had even managed to climb onto a boat moored just off the bank. We wondered how it would get back or whether it was now stuck there, but after we got a bit too close for comfort, it languidly hopped back across to the bank as if it was the simplest thing in the world. 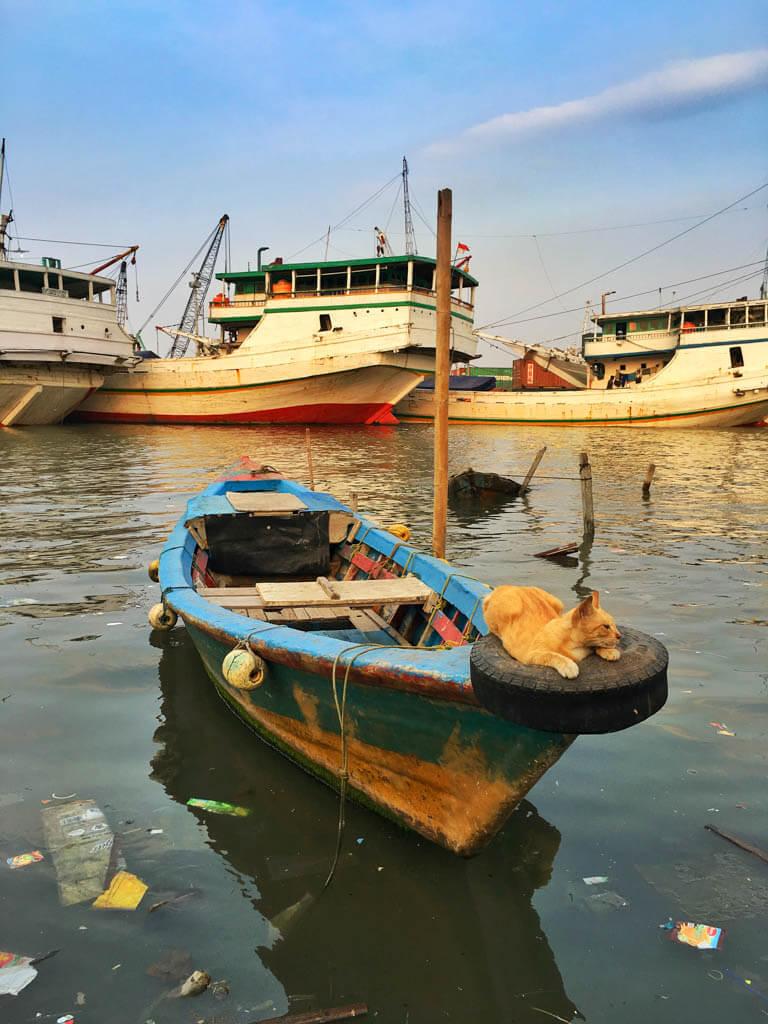 The harbour is not big, and it wasn’t long before we approached the end, where a plank of wood with horizontal slats nailed to it for grip, had been leant against the high wall along the water’s edge to enable people to climb over.  We climbed up and admired the view while balancing precariously on the top. Tip: skinny jeans are not the best apparel for this! On the other side was an area of wasteland, strewn with trash and abandoned building materials, and a group of children laughing as they played football and other games. 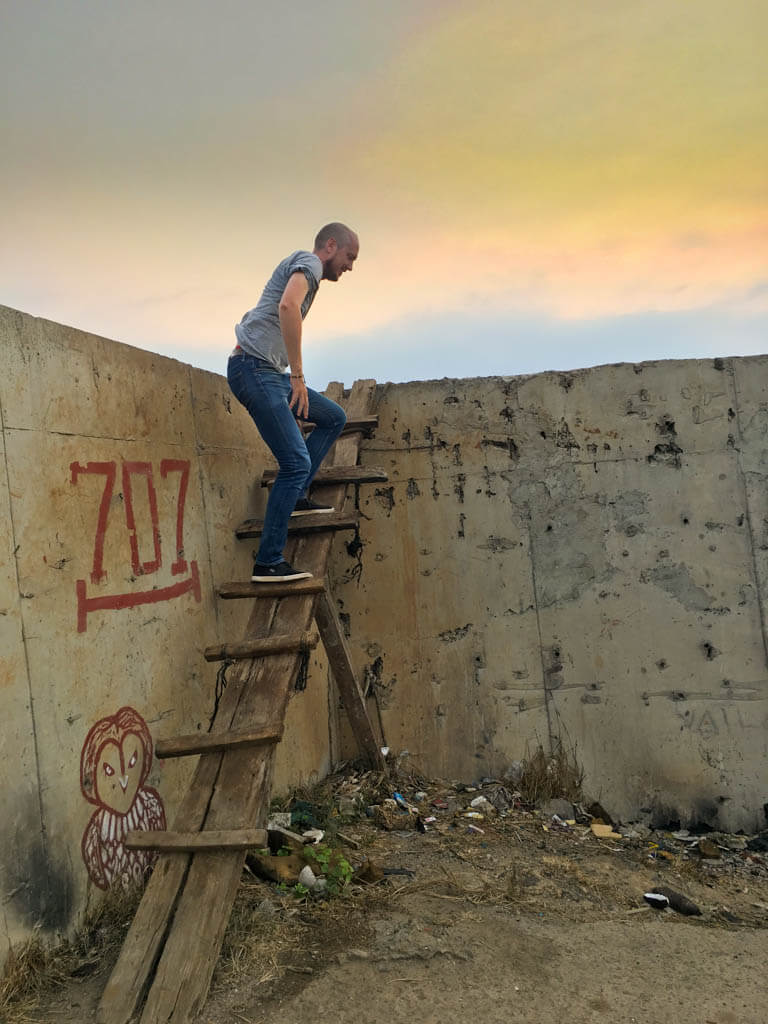 Climbing over the wall from the harbour. As dusk began to fall, we stopped to take a few photos and selfies while balancing on the top. 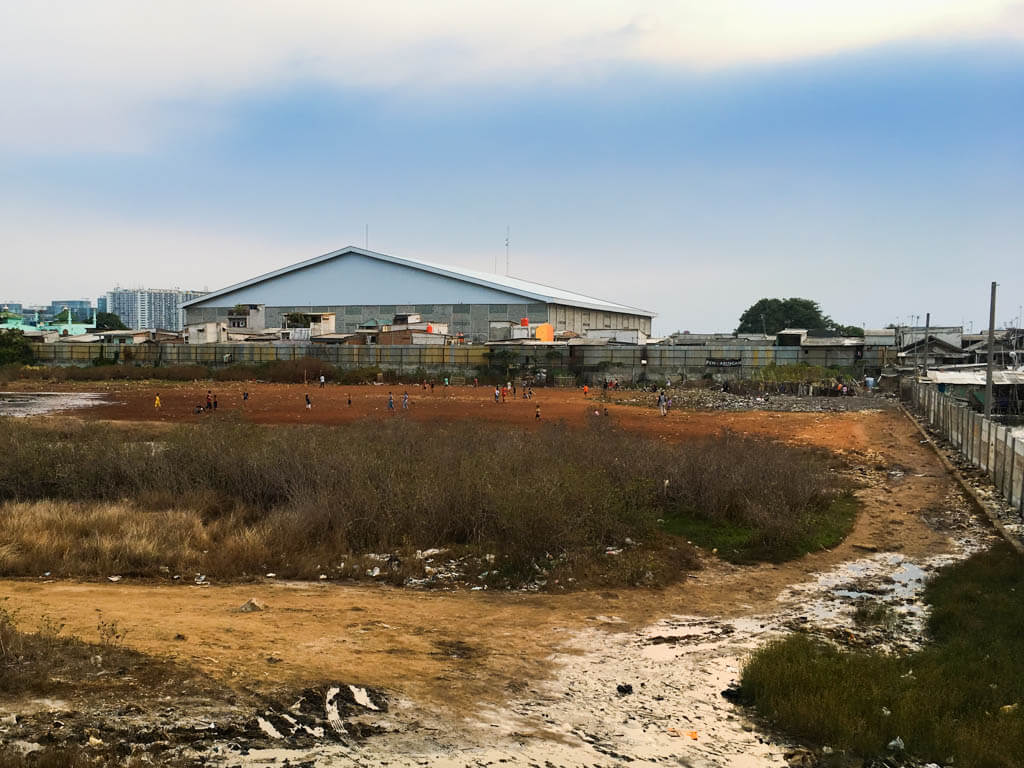 Children having a whale of a time, hopefully after school!

We clambered down a steep ladder on the other side of the wall and walked to where the children were playing.  Some of them, and a couple of adults, came over, excited to see a stranger approaching. One teenage boy asked for money, but the rest were simply curious about the unexpected foreign visitor who’d just climbed over the wall from the harbour.  Most of them lived in a shanty town built of bits of scrap wood, metal and other materials on stilts above some swampy ground with evil-looking black water. Jakarta is gradually sinking, as the ground it’s built upon subsides, some areas at 25cm a year.  The situation is so bad that 40% of the city is now below sea level and the northern part, where Sunda Kelapa harbour is located, is one of the worst affected areas.

I don’t like to intrude by taking too many photos of people’s houses, but I reeled off a couple of the outside of the shanty town.  The water beneath was disgusting, stunk and, again, was full of floating debris, especially plastic. I can only imagine what else ends up in that water.  The health consequences must be grim. 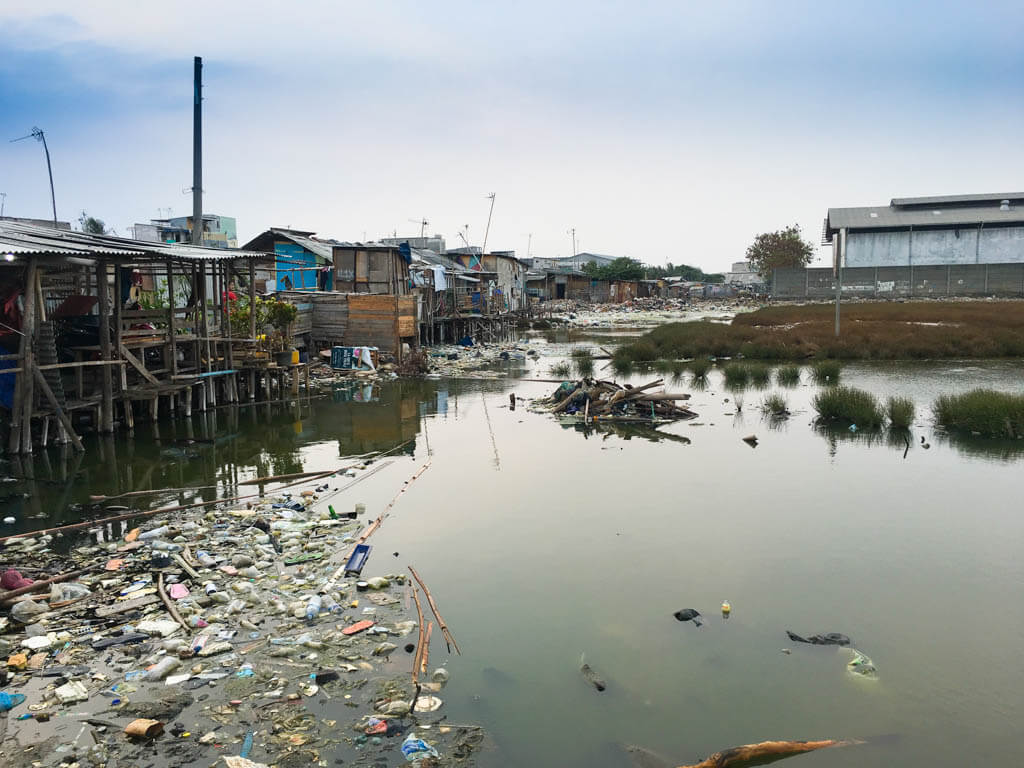 A shanty town perched on stilts above polluted stagnant waters.

Dusk had began to fall, as a group of children led us through the shanty town, which very quickly improved as we walked away from the water.  It was still dirty and smelly, but the quality of the housing was better, with more permanent-looking concrete structures and less wood and scrap metal being used for improvised walls and ceilings. The area was a maze of little alleyways, but our entourage guided us through streets that gradually broadened and felt less squeezed between encroaching buildings.  Eventually, the children left us at the main road out of the area, and we continued on our own, walking for another 45 minutes until we reached Emporium Pluit shopping mall, where it was time to chill out with bubble tea and a dinner of delicious fish soup. After the afternoon’s adventure, entering the modern air-conditioned mall was like stepping into another world, even though the shanty town was just 45 minutes walk away. 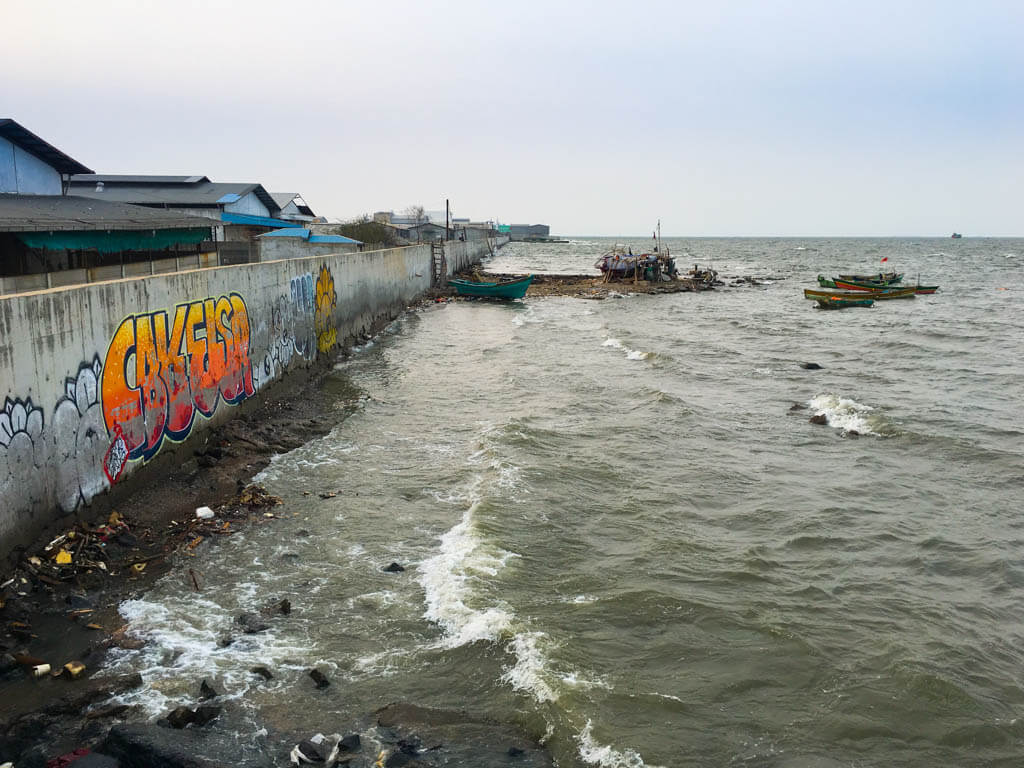 Looking out to sea from the harbour. The area has a really gritty industrial feel to it.

Jakarta, like many of Asian metropolises, is a city of parallel worlds.  There is a bubble inhabited by the middle class, who go shopping in the shiny new malls and work in comfortable modern air-conditioned offices, and there is everyone else.  This is Indonesia, not Brazil, and rates of violent crime are very low. The people are extremely friendly and curious about foreigners, and even the shanty towns are safe to walk through (although obviously use common sense).  Not everyone wants to see the other side of the city – some prefer to stay in the glitzy malls and touristy old town, but for those who do, Sunda Kelapa harbour and the surrounding area will open your eyes.

If you enjoyed reading about Sunda Kelapa harbour, you might also like to read about my adventures in the less developed Indonesian region of West Timor.  Check out the links below:

West Timor: Crystal Pools and the Best Pork in the World

I also spent almost two weeks Couchsurfing in the Jayapura region of the fairy tale land of West Papua: